On March 19th and 20th this year, Festival Moo-Ah! was supposed to take place in the wonderful Raven Hall in Corby UK. Due to most unfortunate events, the festival has been cancelled, and, as so many who were looking forward, I am gutted. And although I, of course, support the decision taken, I am saddened by the fact. Saddened, because I was looking forward to play and meet up with all the crazy people again. 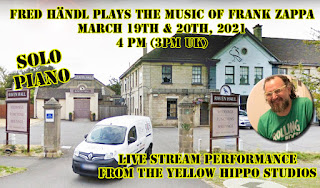